A beautiful morning...not a cloud in the sky.  We have slept in a bit so we are getting a later start than usual. We have our breakfast sitting at the bar down the street and, since it is our second day, we are almost regulars.

After breakfast, we head for the Brera Art Gallery located in the somewhat "arty" quarter of Milan.  We have a nice walk, passing a building with giant stone figures on the front.  In the Milanese dialect, they are called "omenoni" or "great men." 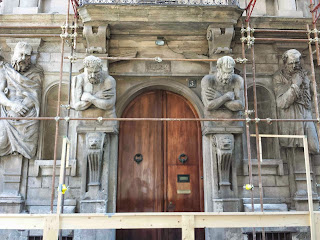 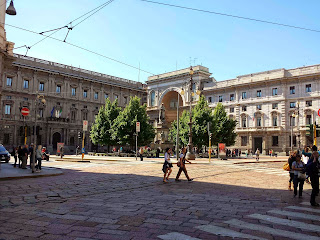 ​
into the Brera neighborhood, full of art galleries, picturesque streets and quirky shops.

Before going into the museum, we stop for a coffee/tea at the Bar Brera 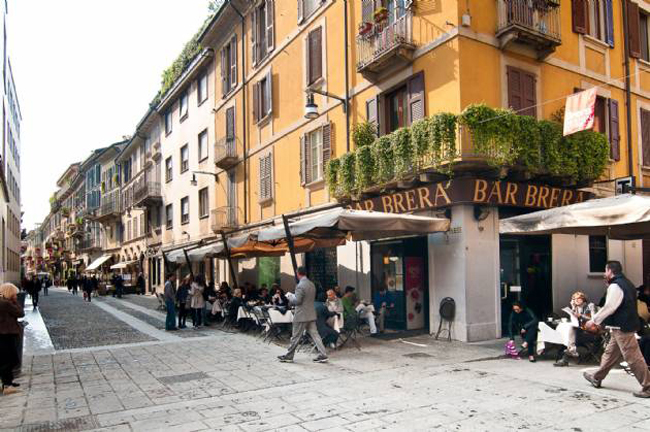 and then head over to the museum.  The Brera is one of the few major art galleries in Italy that didn't start with a great family's art collection.  Rather, when Napoleon was in charge of Italy, he confiscated many works of art from churches, etc. and assembled the works in this public art gallery.

We really enjoy our time in the Brera.  There is a special show about the Bellini Pieta and its influences to celebrate its restoration, which is quite fascinating though a bit crowded.

If anyone is interested in seeing more of the Bellini, this link is pretty comprehensive.

The rest of the museum is not as crowded and it is full of interesting and beautiful paintings from the Renaissance and after.  There are lots of places to sit while viewing the paintings and we see many things we like very much.  Among the highlights are the large canvas painted by the Bellinis of Saint Mark Preaching in Alexandria (which was enhanced by the explanation of the painting by a Brera art student stationed by the painting)

a Tintoretto showing the discovery of the body of St. Mark in Egypt a couple of Last Suppers, one by Crespi


and one by Rubens

that are interesting contrasts to the da Vinci version.

All in all it was a excellent visit to a major art gallery....

Back outside in the warm sunshine, we walk in the direction of our next stop, the Bagatti-Valsecchi House Museum located in the fancy shopping district.  On the way, we stop for lunch at The Swiss Corner very near the Public Gardens; I had passed it the day before in my wanderings.  The restaurant appeared at just the right time and in just the right location.....we had passed many closed restaurants and we needed some time and food before our next activity.  The place was very lively....and the food was also quite good.  We both had the Piemontese version of steak tartare which we enjoyed and Diana had a crepe Tatin for dessert.

The Bagatti-Valsecchi Museum is the home of two brothers who lived in the 19th century who were fascinated by the Renaissance and wanted to make their home a showpiece of the arts of that era.  They were inveterate collectors who also had good taste and their home showed off their collections which they integrated into a house that people actually lived in.  They interspersed paintings and furnishings from the 15th century with new objects that they commissioned to be designed in the Renaissance style. There were stunningly carved pieces of furniture, tapestries and beautiful church art. At the time it was felt that they had rescued the art works from neglect and decay.

I am finding it a bit hard to do justice to the mansion so I will include a link to the web site and and few representative photos (not mine, no photos allowed). To increase the sensory overload of the house, during our visit there was a show of modern design with pieces of sculpture and furniture set down in the middle of each room.

The family lived in the house until 1975 when they created a foundation and sold the house to the Region of Lombardy.  The museum has been open since 1995.

Walking back through the very fancy shopping area, we do a little admiring of windows but we are bit pooped (Diana has been a trouper, walking many miles around Milan: her new knee seems to be working very well) so we stop at a bar on a sunny piazza for some prosecco and snacks before resting for a while in the apartment.

We have a quick, late dinner at a nearby restaurant--incongruously named Replay; Diana has a delicious melon with prosciutto and a baked branzino while I have good grilled Tuscan sausages.  We finish a half bottle of Dolcetto from Piedmont and return to the apartment, watch a bit of the Nationals game (amazing modern technology) and go to bed.

A really good day....we are enjoying Milan very much.

Tomorrow we are planning to visit the La Scala museum and a second house museum--the Casa Poldi-Pezzoli.