Sunny again....we could get spoiled.

Today is market day in Mantova...we had to move our car last night to an area a few blocks away from the hotel.  After breakfast, we call the synagogue to arrange to visit and are told to come anytime before 11 so we head over there immediately.  We make our way through the market set up in the piazzas and side streets.... 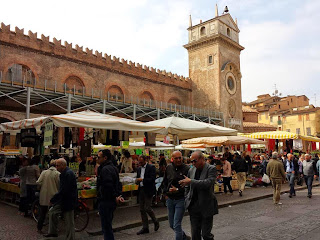 ​
passing through the old ghetto and the Casa del Rabbino...elaborately decorated and now an office building. 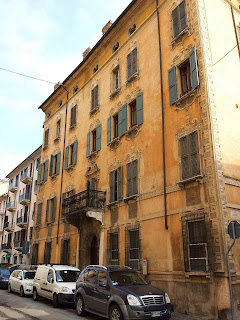 At the sinagoga--a very plain fronted building in a narrow street identified only by small plaque and a wreath commemorating holocaust victims, we are greeted by an enthusiastic woman of our age (Livia Vitali Norsa) who takes us inside and tells us about the building and the Jewish community in Mantova.   Under the Gonzaga, there had been three thousand Jews in Mantova and there were six synagogues.  After the ghetto was closed down at the beginning of the 20th century, many of the buildings were razed and a good part of the community left town. One synagogue was preserved and moved to its present location.   The synagogue is small but beautifully decorated with restraint.  They don't have regular Shabbat services anymore but I did see that the community is quite active with lectures and other activities. 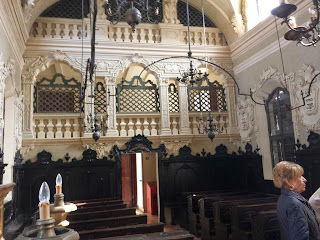 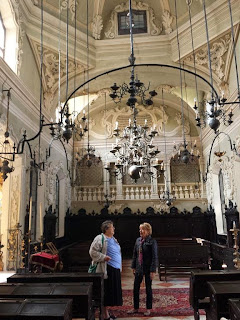 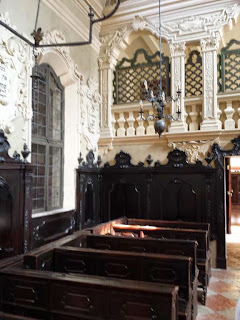 ​
Before leaving, Signora Norsa (whose husband had been head of the community and whose family had contributed to the reconstruction of the synagogue) gave us a book about the community and its cemeteries and we made a donation which was warmly accepted.

We walk back to the center and stroll through the market (we like the markets for people watching rather than buying things, although Diana usually inspects some of the cut fabric work and I am intrigued by some of the kitchen gadgets on sale), 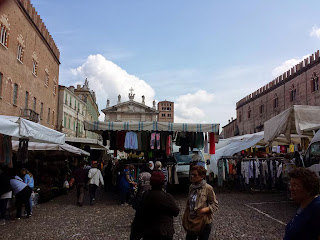 make a quick stop to look at the Duomo, peek into the pretty garden near the Palazzo Ducale 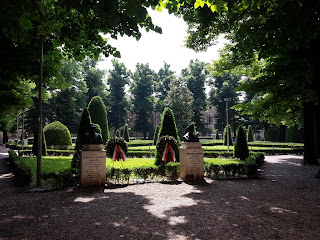 and then walk over to Le Quattro Tette for another delicious lunch...more risotto for Diana and pasta and bean soup for me.

After lunch, we get in the car to explore some of the towns on the Po....we drive through Ostiglia and across to the other side to the town of Revere where we reach the shore at the Lido Po 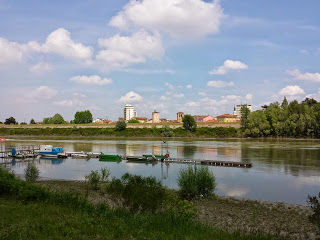 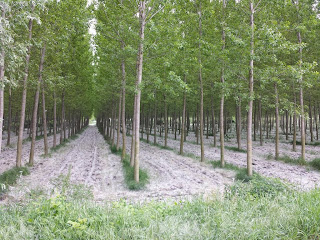 and look at one of the "mulino natante" or floating mills that is now set up as a museum on the river. 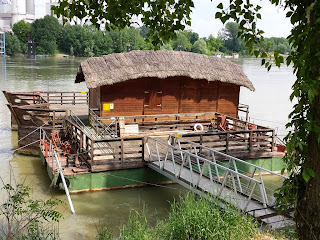 In the mid-afternoon, I take a walk along the "lakes" and see some people fishing and lots of couples snuggling. 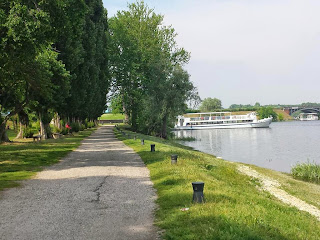 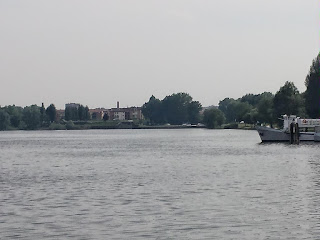 ​
Before the late afternoon prosecco break (sitting in the sun in the Piazza Erbe), we visit the little round church--the Rotonda di San Lorenzo (11th century) 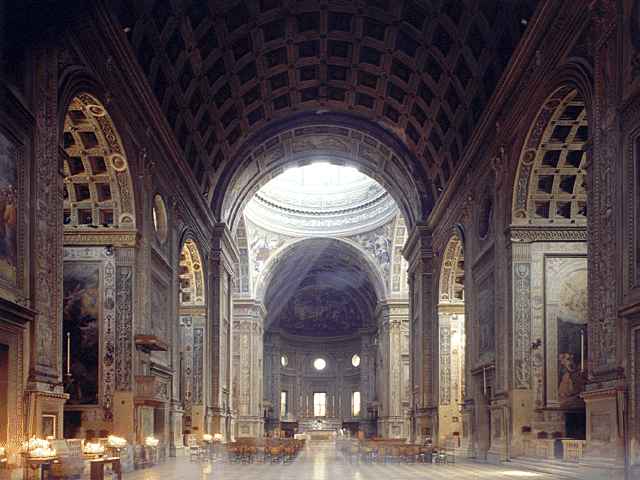 We have another very good dinner at a place recommended by the hotel owner, the stylish Trattoria Leon d'Oro where we are greeted warmly and treated like honored guests.  We share a large plate of salume with appropriate breads (tigelle and gnocco fritto) then Diana has another dish of the risotto alla pilota (excellent) and I have a plate of maccheroni with meat sauce, also very tasty.  More lambrusco is drunk and we hope we can find this quality of the wine back home.  The waitress convinces me to try a dessert concoction with gelato, thinly sliced pears, parmigiano-reggiano and some other strange ingredients; I take one spoonful and stop but somehow it gets eaten up.

We have eaten very, very well in Mantova.....

Tomorrow, we will visit one of the large palaces that is also a gallery--the Palazzo Te.