This morning, we cross the Po to the north bank and head for the small town of Fontanetto Po, about 17 miles from Casale Monferrato.  This is farming country on this side of the river...flat for a long while until the Alps appear in the distance .  As we approach Fontanetto Po, we see the first rice paddies, some filled with green shoots popping through the water.  This area is one of Italy's two rice belts (the other is in the Veneto near Mantova).

Our destination is the Antica Riseria San Giovanni, which has preserved the old water powered mill machinery as a museum to the old technology.

We join a tour that is led by the owner of the mill...he speaks in demonstrative rapid fire Italian that we can't keep up with... 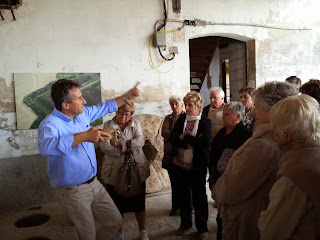 but he is a lot of fun to watch.  We are led through the entire process of rice production in the old manner...from the cleaning to the hulling to the milling to the sifting to the bleaching (explained in the brochure).  And we see all the old machinery that has been preserved.  The highlight of the show is when the water turbine is submerged in the canal and the water that is forced through the inputs powers all the machinery inside.... 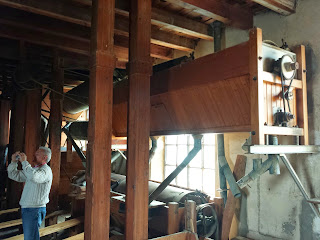 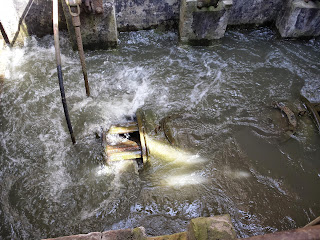 We also have a great time with the Italians in the tour group visiting the mill.  We first talk with the tour operator and his daughter who run a travel agency near Cuneo who want to tell us about their business and about their travels.  Then other members of the group also talk to us--mostly in Italian--about their visits to the States or the American books that they like.  It makes for an interesting and enjoyable morning.

After we leave the rice mill, we do a little Po hunting but after crossing back to the other side, we find that the road veers off from the river.  So we climb up to the high road that parallels the river, stopping in several of the hilltop villages to enjoy the views.

It is getting onto to lunch time and we are saying that it is a perfect day to have Sunday dinner in the country when we pass the Agriturismo Cascina Smeraldo on the top of a hill.

We drive into their parking lot to check it out and see that is crowded with people (mostly families) both inside and out either eating or getting ready to eat.  On an impulse, we ask if we can have lunch and are shown to an outside table complete with a view of the countryside, beautiful roses and the Po. 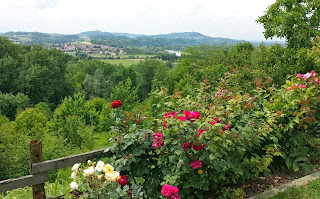 Lunch is an experience...when we expect to get a menu, the waitress brings over a plate of salume and we realize we have fallen into a set lunch which promises to be abundant.   We break down and get a bottle of Barbera that comes with the feast.  The courses continue--vitello tonnato, a Piemontese fritto misto of meat, offal and various sweets, ravioli, risotto with gorgonzola and radicchio, roast beef and potatoes and a piece of cake. We eat as much as we can manage--it is all good especially the salume, the ravioli, the risotto and the potatoes--and finally get up from the table more than two hours after we sat down.  It was more than we bargained for but it was fun.

We drive back to Casale Monferrato because we still have to visit the old synagogue which is open until 5 pm. The synagogue dates back the the late 16th century and was beautifully restored in the 1960s.  There is a very small Jewish community remaining in Casale Monferrato (Piemonte had always been reasonably hospitable to Jews and the conditions improved when Napoleon showed up in the early 1800s.  This is why there are so many Jewish sites all over the region.)   The exterior of the building, located in a small alley in the center of town, hides the richness of the interior.

When we go into the sanctuary, to the sound of cantorial singing, we find a group of Australian Orthodox Jews, who are traveling in Europe with their rabbis.  They seem very excited by the place and are enthusiastically looking at everything and pointing out interesting things to their colleagues. 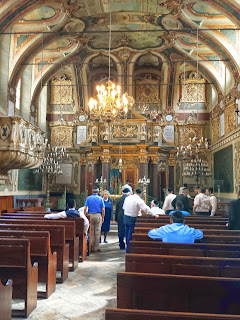 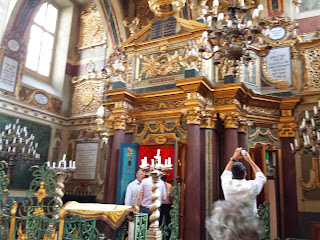 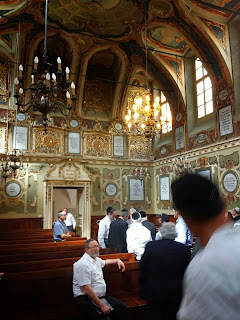 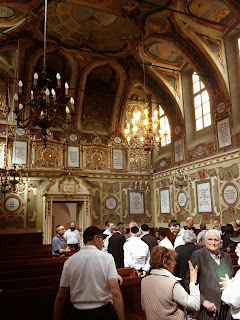 In the middle of everything,the two rabbis begin to chant some melodies from the Yom Kippur service...Diana is quite transfixed by this.  They could be opera singers but are prompting one another with the typical hand gestures of Chassidic Jews. We speak to Sig.ra Adriana Ottolenghi, the wife of the President of the community, whom we had met 15 years before on our previous visit but, since they now have upwards of 15,000 visitors a year, she doesn't remember us.  :)

In addition to the Australians, there is a bicycle group, an Italian tour group and a few others in the synagogue and in the museum upstairs.  The synagogue has become one of the major tourist attractions in the town.

With so many visitors, it is quite hectic and noisy so we leave after a brief tour of the museum and return "home".

Tomorrow we are off to Lake Como, the last stop of our vacation.

At the end of these trips I usually share what books I've read. This year I brought along some New Yorkers which kept me busy for a while and then only read 3 books. One was 631 pages long, but still, I don't have much to report. But those that I read I can recommend highly.

1. Days of Abandonment by Elena Ferrante. I thought this was a brilliant (first) novel by a contemporary Italian author. A man leaves his wife after 15 years of marriage and 2 children and she's devastated. She's desperate to understand why, and goes a bit mad in the process, though ultimately comes through. Very vivid, very intimate, very gripping.

2. The Time of Our Singing by Richard Powers. A great American novel that deals with race, time and music. Narrated by Joseph, the son of a black mother and Jewish German immigrant physicist father who met at the 1939 Marian Anderson concert at the Lincoln Memorial. Joe and his brother Jonah are musicians. Their sister Ruth turns to Black Power and becomes a Black Panther. The parents want to raise their children "above" race, but this can't happen in that USA. The novel moves from the '40's and '50's through to the '90's. It's an amazingly rich, complex novel. The descriptions and uses of music are fantastic. This book was the 631 page one, and it does go on a bit, but I loved it!

3. The Unwinding by George Packer. A non-fiction examination by the New Yorker writer of the 4 decades during which America unwound - in terms of the loss of jobs, the housing crisis, the financial crisis and the lack of government will to deal with these issues. There are in depth portraits of 4 people and a city, Tampa: Tammy, a laid-off worker who becomes a community organizer in Youngstown, OH; a political operative Jeff Connaughton; a NC biofuel entrepeneur and a Silicon Valley millionaire. Packer also has short portraits of various celebrities, such as Oprah, Sam Walton, Newt Gingrich - and  Elizabeth Warren. The book is modeled on Dos Passos but is non-fiction. Depressing, wonderful journalism, with not too many answers.