Sunny, but a bit cooler as we pack up and say our goodbyes to the Palazzo Vescovile and Noli....we have really enjoyed our stay here; Noli has been a great discovery.

The drive to Barge in western Piemonte starts out on the autostrada going north from Savona...the road climbs through green hills and mountains through a seemingly unpopulated area.  The autostrada is so divided that sometimes the lanes running in the opposite direction are out of sight or distantly seen across a valley.  And the roadways are elevated high above the valley floor.... 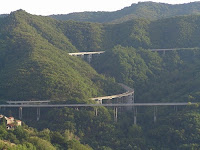