Weather appears to better this morning.....at least it isn't raining.  By the time we finish breakfast and get in the car, the sun is trying to peek through the cloud cover.

We drive back to Saluzzo to visit the town under better weather conditions and also to see if there is a laundromat there.  We park in the same lot and go into the tourist office where they quickly show us where two laundromats are within two blocks.  They also direct us to the old Jewish ghetto around the corner but tell us that the synagogue can't be visited.

We can't find the exact building where the synagogue is located in the little cul-de-sac but at the entrance of the street--actually the corner of via Spielberg and via Deportati Ebrei--there is a very moving historical marker with the history of the community on one side and a comprehensive listing of the families and the details of their fates under the Nazis. 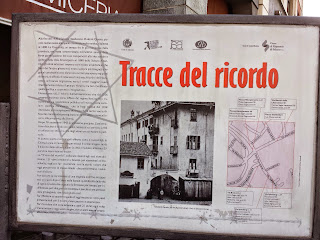 Visitors have left stones at the base of the marker in remembrance.
Posted by Jim Zurer at 11:38 AM No comments: